It’s not everyday that you get to have an awesome 100K right in your backyard. Well, more like a 30-minute drive for me to get to the starting line. A few of my fellow runners were attempting their first 100K at the Quicksilver 100K and I figured I’ll show up at the finish line to see them. Quicksilver 100K is on my to-run list, but after getting into the lottery for the Miwok 100K (last week), I decided to punt on this for 2015.

It’s always amazing to see runners come through the finish line after spending 12+ hours on the trail. With a 13,000+ft elevation profile and a fair number of exposed fire trails, the Quicksilver 100K is not exactly a walk in the park. So congrats on everyone on a fantastic finish! Mark was in a state of denial and bliss when I pulled into the parking lot at the finish line around 4:30pm. With a 10ish hour finish, this was a 2 hour PR for him on this course. 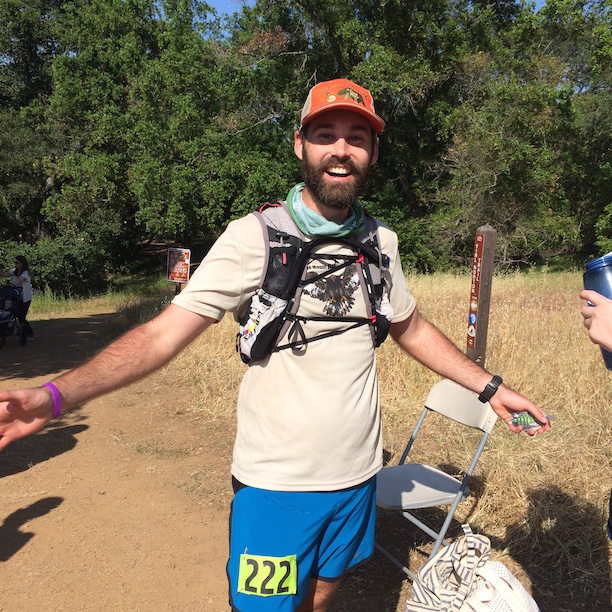 Bryan Weather’s been rocking on the trails recently with some fantastic finish times. His secret? The ultra-beard. Apparently kept him cool on the exposed trails. He looked strong at the finish line. Jose Cruz was hanging out at the finish line. It was great to see him out there and he (along with many other amazing volunteers) had been there since the wee hours of the morning helping runners out. Jean Pommier with 2 back to back 100Ks

I don’t know how Jean does it. Two back to back 100Ks (Miwok + Quicksilver) and still volunteering at the beer station. I think he got suspicious after I showed up 4 times asking for beer within a span of 30 minutes. Jean, just so you know, they weren’t for me. 🙂 I was playing the official bar tender at the finish line, asking people what they wanted. It was mostly water, coke or a beer. Personally, always go for the IPA at the finish line. Best drink you’ve had all day after a trail run. Jack Hsueh At the Finish Line

I ran the Golden Hills Marathon with Jack. It was great to see him again. First 100K, I think? Andy Belk at the finish line My first time meeting Rajeev, but heard much about how well Quicksilver 100K is organized. A new runner friend. Asked him what he wanted when he crossed the finish line and the first words out of his mouth was: beer. Of course. One beer coming up! Wonder how conversations with these top runners go. Chikara won the American River 50M in 6:13 and won the race again today. Speedster. Jacob, aka #ultrasprinkles, super excited at the finish line. Good luck to him running the Bryce 100M in just a week or so. Jacob with his pacer Chihping’s race videos (have you seen one?) are super awesome. Brian Mulholand with his pacer Francesca

Brian Mulholand with his pacer Francesca crossing the finish line at around 7:50pm.

People that I hung out with, but didn’t take a pictures (I so thought I did!) were Makikko Yamashita and Nate Dunn. And this blog wouldn’t be complete without mentioning John Onate who missed a flag, took the wrong turn, ended up at the starting line. And then had to work his way back to the finish with 2 bonus miles to go. Still made it in 15:53 and qualified for the Western States 100M. Nice job John!

Best overhead conversation at the finish line? Someone freaking out during a bio-break in the middle of a run and realizing it was just the beet salad from the night before. Well, yes, I know, gross. But welcome to ultra running. 🙂