I don’t remember where I first read about the ElliptiGO Bike. I think it was about Dean Karnazes using the ElliptiGO Bike to get all the way to LA and then immediately running the LA marathon. Or something. After a tough race or a run, I usually cross train with my elliptical, roller blades or my bike. As much as I like my elliptical at home, it’s painful to stare at a wall for 2 hours. So as I was icing my sore ankle the day after the Quarry Lakes Marathon, I was really curious to check it out.

Checking Out The ElliptiGO Bike

I was out for lunch with my family on a chilly day and I made an impromptu visit to Performance Bicycle to test ride the ElliptiGO Bike. The bike itself is a cross between an elliptical and a bicycle (duh!) in that it has no seats, sliding pedals that move on a track system, two wheels and a handlebar. Apparently you can also make it into a stationary elliptical by mounting on a stand. Though that kinda defeats the purpose. The three models, the 3C, 8C and the 11R are in the price range from $1,1799 to $3,499. Nope, these are not cheap, but apparently endurance athletes use them to keep running, but without the pounding. 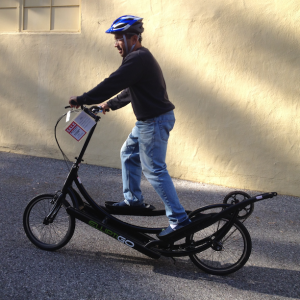 The only model the store had was the ElliptiGO Bike 3C with 3 gears and it weighed a ton! Well, 42 lbs, actually. After filling out the waiver forms and providing my driver’s license, I took it for a ride in the neighborhood streets for about 20 minutes. I was so not dressed for it, but within minutes, I was working up a sweat and could feel my calves and quads working hard. Took me a while to get used to changing gears (it wasn’t as smooth as I thought it would be) and you really do need to shift to low gear before coming to a stop so you can get going again. My biggest surprise and a gripe was the small roller wheels on the pedals that move up and down the track system felt clunky and loud. They were loud enough to be distracting. There were no hills nearby and it was kinda fun to pick up speed on the flats. Got my share of stares from the neighbors too. I think it’s a brilliant idea to combine an impact-free elliptical with an outdoor bike, but the ElliptiGO Bike 3C model didn’t give me the warm fuzzies. Besides, I was thinking, the only time I really need this is the week after a race when my ankles are sore. So I personally would prefer a rental instead of splurging 2G’s on something I use occasionally.

The other personal “mover” that I’m super curious about is the Solowheel, marketed as the smallest, greenest, most convenient transportation ever invented.

Have you tried the ElliptiGO Bike? What do you think about it?