It seems that minor injuries are inevitable when you first start running. Well, part of the story is that the muscles strengthen much faster than the bones and tendons giving you the impression that you can fire up all cylinders early on. This can lead to various running injuries like top of the foot pain and ankle pain. Depending on how much you push, this can range anywhere from minor tendonitis to stress fractures. When I started running (mostly barefoot), I encountered some of these injuries. Luckily these were minor for me, but took me a lot of research to name what these injuries were and to figure out home remedies that fixed me up and kept me going.

Top of the Foot Pain 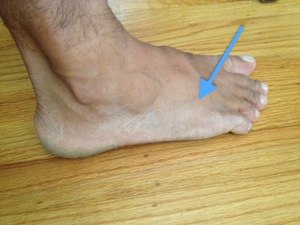 Top of the Foot Pain

This was the worst of all my injuries in the first 6 months and it happened on an accidental 12 mile run. It was accidental because I forgot the 10 percent rule in running and just three months into it ran more than double the distance that I was normally doing. I felt an aching pain along my pinky toe and learned that there are these little bones in your feet called the metatarsals. Stress fractures amongst these bones are considered to be common amongst runners, especially the fifth metatarsal. You see, when you run barefoot, your feet naturally does something called pronation. The outside part of your feet land first, your toes splay to grab the ground and your ankle gently rolls inside. This is normal body mechanics and nature’s built-in shock absorption mechanism. But when you are starting out, the fifth metatarsal (your pinky toe) tends to fracture because it’s not strong enough. Sad part of this injury is that it took me a long time to even figure out that ‘top of the foot pain’ was how this is described. I was kinda scared that this was a stress fracture, but after a few days of rest and cross training, it turned out to be minor tendonitis. Whew!

In the first six months of running, I encountered this injury just twice. Looking back, both times were associated with running on uneven terrain. The first time was on a trail and the second time was on a beach, running right next to the waves. Given the minor side to side gradation (not ascending or descending), my feet were coming down at an angle causing a gentle twist of the ankle. After 20 minutes or running like that, my outer ankle was simply sore from the awkward angle.

I encountered this twice during the first six months of running. The first time was right after the epic (but dumb) 12-mile run that I mentioned above. The second time was a week after I ran the San Francisco Half Marathon. After the race day, I took a few days off from running. A week later, I was on the elliptical for about an hour. Right after that, I felt a very sharp pain in my inner ankle to the point where I was grimacing every time I placed my foot on the ground. It felt like a nerve was getting pinched. Somehow though, after icing, massaging and getting some rest, the pain simply went away.